So, for my birthday, a friend of mine bought me the book: Anointed for Business by Ed Silvoso.

This friend had shared with me her desire to enter politics which I’d (initially) vigorously discouraged her to do! But as I begun to delve into the book I apologised to her for not having been supportive of her aspirations. And I encouraged her to read the book too.

I think she was surprised by my change of heart – well at least that’s how she sounded to me. I know she’d no idea that her gift would open my heart and mind to her own aspirations. She’d bought the book to perhaps cement me further in my journey and yet it also shed some light on how I am to respect and honour other people’s dreams even when they don’t fit into my idea of “right”. 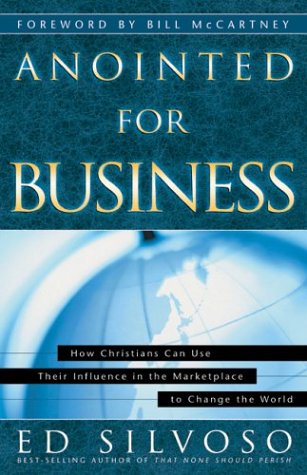 So, you may ask, what does a business book have to do with politics?

The point Ed tries to make in his book is this: The highest calling when serving God is not limited to going into ministry as a Pastor or missionary or other roles in the church. God can and should be served in industry outside the church too. How else will the gospel be preached “to all corners of the earth”?

When my friend told me she wanted to go into politics I was flabbergasted!

Why would anyone (especially a Christian!) want to enter a field that most of us believe is corrupt and rotten to the core?!!!

Before my change of heart what I’d said to her was: “As Christians I don’t think we’re called to get involved in politics.”

I mean it’s ok for us to comment on what politicians do, criticise them – support one party or the other – vote – but it’s not ok to get involved where it really matters? That doesn’t even make sense Hannah!

And this is what Ed’s book is teaching me. The field of politics (like every other field there is) needs Jesus.

This morning I was encouraging my cousin who lives, walks, dreams soccer. Nothing else in his life brings him as much joy as playing the game. At the moment it really does seem to be his only reason for being.

He has a fire in him for soccer I pray never goes out. This morning I reminded him that our talents, and gifts, our dreams and passions, our hearts’ desires… have all been placed in us by God for His purpose and His glory.

We enjoy them because that is another testament to how amazing God is: He sends us on missions we will enjoy all the way. He is just as concerned about our joy and our sense of fulfilment  as He is about His mission being achieved. And His mission for all of us is this: That we would live abundant lives.

I really believe that when people go into careers that are not in their hearts they are failing themselves and ultimately rejecting God’s gift of an abundant life.

Parents who force their children to pursue vocations that are not their desires rob their kids of an abundant life. May we who have been entrusted with this very important mission be wise and discerning to what makes our children’s hearts pump with joy.

Success is living a joyful life.

What is money when you loathe what you do so much it makes you physically ill?

Research shows that unhappy employees are a drain on any company. They are unproductive and off work often. It’s a no-brainer that when your soul is unhappy it will manifest in your physical body. The key to getting better is getting joy. And getting joy for you means… well only you know that.

Dreams are the most precious things we have. Dreams are hopes for something. Dreams are so crucial that did you know that if you don’t dream/hope for anything God cannot do much in your life?

Don’t believe me? Ok check this out – for you Bible people who want Scripture “proof” what are we told faith is?

So if you have no hope faith cannot work. And if you don’t have faith then it’s virtually impossible to have the fullness of God in your life and yeah – it’s impossible to please Him.

So dreams are crucial.

And don’t worry about people that don’t get your dreams – your dreams were given to you and not to them.

Don’t worry about who leaves you while you’re on your way to realising your dreams – some people gots to go if you’re to get to where you’re going. Some folks you may get rid of yourself, some will abandon you but know this they didn’t abandon you – that was an all-wise God removing people who would only hinder you and He had to get them out of the way.

When I was a kid, especially in my teens, my mom made me get rid of friends she didn’t like. I can tell you now that I resented her for it. But I obeyed her albeit with much attitude and gave her the cold shoulder for weeks on end. But today I know what my mom was doing then: she was protecting my destiny. She knew that friends had great influence and they could derail the greatness she saw in me. So if my mom, an earthly parent, could be that protective of where I was going what more the Father who created me and gave Himself, even to death, so that  I could live?

Yeah people this is some hectic stuff.

Joseph’s brothers resented him for his dreams. They mocked him, even his own father who loved him and adored him got angry with Joseph for his dreams. You know the rest…

Then there was Naomi. She lost everything. Her home, her husband, her kids – the loss was so overwhelming I can’t imagine the courage it took for her to go on. The pain of everything she’d endured compelled her to tell people to call her Mara which means bitter.

But God was not done with Naomi. He was not going to let her go out like that! He restored her and made a her a Somebody again. He even restored her youth. Don’t believe me? Go look at that story again – what old woman do you know gonna breastfeed a baby huh?

So it doesn’t matter how old you think you are or what you’ve lost – If you are still breathing there is still time to make your dreams happen.

Then there’s David. We all know the story so here’s what I want to highlight – God made people go and look for David so he could be anointed to be king.

So wherever you are God will send the right people to find you and connect you to your destiny. And this is exactly what I told my soccer loving cousin. And I told him he shouldn’t worry about naysayers who may not believe the greatness in him – even David’s own father didn’t believe that his youngest, smallest, sheep herding kid would be king of Israel. But you see it wasn’t up to David’s dad to make him king – it was up to God.

So while you’re dreaming and thanking God for the massive dreams He’s put in your head and heart – tell the naysayers to please step aside cos God isn’t talking to them about you. LOL!!! Oh I love that one!

And when you pray and people hear you speak about your great dreams – don’t worry about the doubt-ridden looks on their faces, as T.D. Jakes would say, just tell them: “I wasn’t talking to you!”

It’s up to no one but you and God to get where you’re going.

And where you want to be is where He needs you to be.

The world needs Jesus. And the people that need Jesus the most are not sitting next to you in church; they are in government or on the soccer field, or their kids go to school with your kid or they are work colleagues or business associates – the point dear friend is this: you’ve been drafted – will you answer the call?