The quotes were like surges of pure energy rushing through me. They did much to call me out of my little shelter into greater things.

There were many fantastic quotes but perhaps the one that spoke to me the most yesterday was: 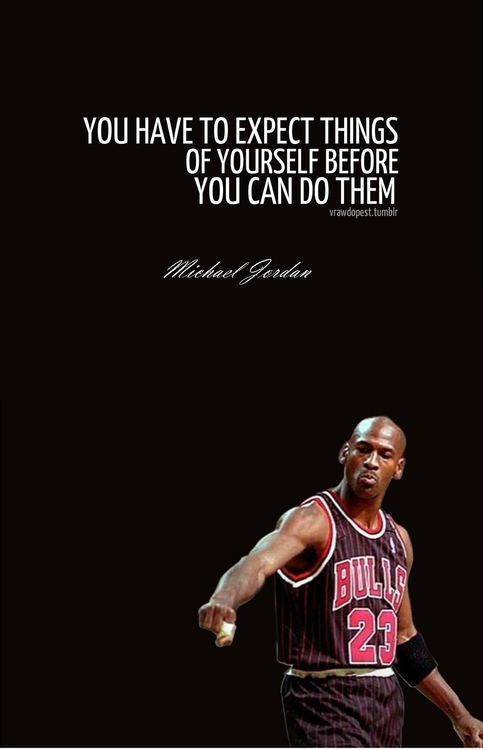 Michael’s quote echoed what I’d been learning in the past week about how vital the image I had of myself was to my success.

Whatever we see of ourselves is  who we become.

Successful people have failed many times. Even when they become successes they still experience failures. It’s part of life.

But what makes successful people different is that they see failures as incidents  and not as the story of their lives.

In an interview with Dream BIG, entrepreneur Max Mugabe, speaks of how we cannot prevent things from happening. He said “The happening will always happen, how we react is what matters.”

People who perpetually fail are usually marked by an inner belief that their entire  lives are failures. So the cycle of their failures continues because… it’s what they expect.

Sometimes a person will say one horrible thing to us. We take that nasty word and nurture it; We give it a supreme place in our hearts. We water it, cook for it, feed it… Soon that one word is a sentence, then a paragraph- before we know it we’ve written entire books from one bad word someone threw at us!

Our lives are only meaningless when we choose to believe they are.

I’ve been through bouts of depression many times.

A few times I went through depression so bad I contemplated taking my own life.

Once I went so far as taking an enormous amount of pills- but I thank God for pulling me out of that pit! The way He did it was by reminding me that there was far much more to my life than I was belittling myself to.

Looking back at every single incident of depression I’ve had I can surely say each one begun with allowing wrong thinking to grow in my mind. Since I realised this I’ve been extremely vigilant about what I allow my mind to dwell on.

If you don’t hope for something better for your life you will die. Maybe not physically but everyday will be like death for you.

If you don’t have something great that you’re working towards every day you breathe will be long and unbearable.

I’ve seen with my own life that when I’m surrounded by inspiration I get excited about what lies ahead for me. I find myself sparking with brilliant ideas- I’m empowered to take more steps and strides towards what I hope for.

If we allow ourselves to perpetually dwell in places where failure is the  option then it’s inevitable that failure will be our constant experience.

People may say they don’t choose  failure- but every time we dwell in negativity we are choosing failure.

Looking back at all the guests we’ve had on Dream BIG it appears to me that failure was never an option for any of them.

I don’t think it’s that they were perfect or utterly confident in their abilities- what I saw in each of our Dream BIG guests was a drive for success that was far greater than their regard for failure.

Inspiration is vital for sustaining this kind of attitude.

One of our Dream BIG guests, Jennifer Swanepoel, shared that her faith in God was her lifeline.

I think one of the reasons for this is that God has a history of making people super successful.

The Bible is filled with stories of God’s victory, His favour, His incredible ability to do the impossible, His generosity in turning dire situations around… when we tap into Him we are flooded with inspiration that tells us that the dump we may be in is not final.

William Jimerson, another Dream BIG guest, spoke to us about opportunity. He said no matter where a person was from, no matter how poor they were, opportunity would come for them; The question was would they be prepared for that opportunity?

William spoke about how (even though he came from a rough environment) his family exposed him to places and people that inspired him.

Today William has one of the most influential financial firms on the African Continent.

As a single, teenage, mom Jennifer worked two, sometimes three, jobs to ensure that her children went to schools in environments that inspired them to be great. Because Jennifer knew this profound truth: Inspiration is essential.

Oftentimes we feed ourselves with so much rubbish it’s an absolute miracle we don’t self combust from all the negativity we allow in our minds- Then we wonder how come we’re so depressed? How come we’re so miserable? How come it’s tough for us to be positive? How come year after year we remain in the same rut unable to make progress? To each question the answer is always: The junk we fill our minds with.

Until we change the image we have of ourselves in our own minds the greatness we hope for will never happen. It can’t.

It’d be like hoping sunflowers grow in the antarctic- that environment would never allow that.

The only way to create and sustain environments that nurture our dreams is to dwell in resources that inspire.

It’s impossible to be positive and resilient when we dwell in negative, life sucking, environments.

And by environments I mean ways of thinking.

The majority of poor people stay poor not because there are no opportunities available to them- but because they don’t ever change how they think.

Even when flooded with wave upon wave of opportunity they remain exactly where they are. Because as Will said- we have to prepare ourselves for opportunity.

Reading Michael Jordan’s quotes yesterday I received a fresh wave of inspiration;  First about myself and then about our work on the Dream BIG Project.

Since we started the project I’ve known that it was a “cool” project but now more than ever I see it as such an essential part of our existence: Firstly because Dream BIG exists to nudge each one of us to unleash the tremendous potential within us. And second- Dream BIG is an opportunity for each of us to delve into the amazing power inspiration holds.

Our daily goal at Dream BIG is to bring you nuggets of inspiration each day. Follow us on Facebook and see the power of inspiration change your life.

Having said that I’m also the first to say that of course we’re not the only source of inspiration on the planet. There are millions of resources available to us every single day.

Tap into them and live out this amazing life you were put on this earth to enjoy.

Our favourite Dictionary Definitions of Inspiration: