“Although both dads worked hard, I noticed that one had a habit of putting his brain to sleep when it came to money matters, and the other had a habit of exercising his brain. The long-term result was that one dad grew stronger financially and the other grew weaker. It is not much different from a person who goes to the gym to exercise on a regular basis versus someone who sits on the couch watching television. Proper physical exercise increases your chances for health, and proper mental exercise increases your chances for wealth. Laziness decreases both health and wealth.

My two dads had opposing attitudes in thought. One dad thought that the rich should pay more in taxes to take care of those less fortunate. The other said, “Taxes punish those who produce and reward those who don’t produce.”

One encouraged talking about money and business at the dinner table. The other forbade the subject of money to be discussed over a meal.

One said, “When it comes to money, play it safe, don’t take risks.” The other said, “Learn to manage risk.”

One believed, “Our home is our largest asset.” The other believed, “My house is a liability, and if your house is your largest investment, you’re in trouble.”

One dad believed in a company or the government taking care of you and your needs. He was always concerned about pay raises, retirement plans, medical benefits, sick leave, vacation days and other perks…. The other believed in total financial self-reliance. He spoke out against the “entitlement” mentality and how it was creating weak and financially needy people. He was emphatic about being financially competent.

One dad struggled to save a few dollars. The other simply created investments.

Being a product of two strong dads allowed me the luxury of observing the effects different thoughts have on one’s life. I noticed that people really do shape their life through the thoughts.” 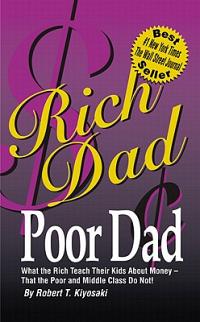 and/or (I really hope you go for and)

Visit the richdad.com website – It has really cool stuff there for FREE!