This is my Brother Brighton.

You’ll be hard-pressed to find a harder working person on the planet. And I mean that.

But hard work, while commendable, is usually neither here nor there- what I’d really like to share about this remarkable Young Man is his heart.

Brighton’s younger than me.

When we were small I remember him being annoyingly meticulous at everything he did. Annoying because I felt he made me look bad- I wasn’t as diligent as he was.

When my mom gave us chores Brighton would take tasks assigned to him so seriously it irked me! But now as an adult I admire this quality.

As kids Brighton always said he’d make it BIG. Even back then, when he was just a child, his main reason for wanting to be successful was so we, his family, would not suffer.

For the most part my brothers and I grew up tough.

We learned to work hard from very early on- but no one worked harder than my brother Brighton. He was barely ten when he eagerly helped my mother in her business.

He would work alongside my mom carrying insanely heavy items that, looking back, were quite a feat for one so young.

But Brighton was driven by something none of us could articulate- a drive to make things happen for himself no matter how hard the going went. Thankfully, years later, he hasn’t changed.

I will never forget a time when I was in college with no financial support for my schooling- Brighton committed to providing essentials I needed- including paying for a trip that built my portfolio and did much to help me secure my first job as a journalist. At the time he was waiting tables at a restaurant.

During that same period our family came under huge financial strain. Brighton and our younger brother Michael, on their waiters’ wages, provided most of the food that landed on our table. Michael was 17, Brighton 19.

It’s true what they say about people who go through hardships at a young age. I see the tenacity and raw determination it built in my brothers.

No road was paved for them. They bashed out courses on their own- going places, sometimes far and daunting, to make things happen- often with only each other for support.

Brighton is a grown man now. And yet that Warrior Heart I remember of him as a child has not changed. It roars ever louder!

There’s a rare quality I’ve seen in my brother that I admire deeply: Brighton is Loyal.

When we were younger, no matter how tough things got for us as a family he never abandoned ship. There were times I’d walk away- but Brighton never.

I’ve come to know him as a man of his Word. Whenever he’s told me he’ll do something- he’s come through for me- every single time!

During the times he’s offered support in my business Brighton’s valued my clients as though they were his very own.

Knowing the financial strain of a start-up he’s at times provided me with remarkable unpaid for expertise as though he were working on his own venture!

I have a Warrior for a Brother. A Mighty Soldier I know has my back no matter what. I’m extremely proud of that.

“I wondered why somebody didn’t do something. Then I realised, I am Somebody.” ~ – Author Unknown

This quote lingered in my head for a while.

How often do we rage about something and yet all we do is complain?

I believe we are living in one of the most exciting times in History.

South Africa in particular is ripe for many wonderful things. The only people who are going to unleash that Wonderful are You and Me.

There isn’t another way it’s going to happen.

A Revolution is on the horizon.

It’s powered by passionate people who cannot be kept down. Who are willing to go the distance because their convictions are solid. Revolutionaries who take insane jumps not because they’re certain of their landing- but because they’d rather soar for one moment than live an entire life of wondering: “What if?”

And so dear friends I leave you with a wonderful quote I stumbled upon earlier this week and a fascinating snippet from a fiery woman who is all about being the change she wants to see. 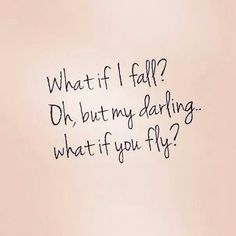